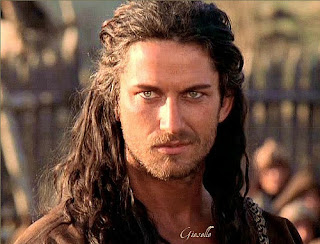 How do you like my current pirate hero, Gerard Butler? Of course, in my wip he is Captain Lucas "Bloodstone" Barrett and we are having a load of fun getting him and my heroine Travea together for a happy ending!


In our Atlantic waters pirates had their greatest days in the 1600’s and 1700’s. Piracy was often a form of freedom for the outcasts of society, as well as attractive to some second and third sons of nobles who saw it as a way to gain the wealth they didn’t gain from birth order. Of course, pirates have been around a lot longer than this time period and still operate in many parts of the world today.

Caribbean pirate ships didn’t roam around hoping to chance upon a victim; they were smarter. They patrolled known shipping routes, especially Spanish treasure routes from the Incas to Spain. During much of this time, many governments (particularly England) supported piracy, encouraging it as a cheap way to get expensive goods into their country. England and other governments issued “letters of marque” which gave their own “privateers” as they called these type captains, permission to attack and plunder ships of their country’s enemies.

Piracy became so prevalent at times that honest sea-faring trade almost ground to a halt. Then the governments would begin working against the pirates. They withdrew letters of marque, tracked down the pirates, and hanged them in public.

An amazing story of this kind is emblazoned in the history of Charleston, South Carolina, my home state and favorite city.

In May of that year, the notorious pirate Blackbeard blockaded Charles Town Harbor with his large pirate fleet, captured and plundered nine ships of much gold and silver, and took all the passengers captive including a member of the Charleston legislature, Samuel Wragg. In a message to South Carolina Gov. Robert Johnson, Blackbeard demanded a large supply of medicine in exchange for his captives. The meds, which Blackbeard did not find on the ships he plundered, were needed to relieve a pirate’s recurring nightmare, syphilis.

The Charles Town leaders capitulated and sent the meds. The captives were released and Blackbeard and his fleet sailed off to Ocracoke, North Carolina, in the gayest of pirate spirits.

However, there’s another amazing footnote to this story.

When the South Carolina leaders gave in to Blackbeard’s demands, it seemed that feelings of shame, indignation, and revenge were outranked by fear. Actually, knowing Southerners like I do, since my family has lived here for many generations, and what history has now recorded of this incident; it was wisdom that outranked the lot with revenge simply being reserved.

In Part 2 I will share, as Paul Harvey would say, “the rest of this story.”

Drop by again and keep writing!