by Elva Cobb Martin --I happily give credit to articles by William Federer
https://www.themaven.net/americanminute/

For my wip, an historical romance, Georgia Ann, set in Charles Town and on the Barbary Coast in the 1700's, I did a lot of research. Below are some compelling facts that shed light today for wise dealing with Islamic terrorists and "harmless" immigrating Muslims wanting to come to America but still give allegiance to their Koran's command to make every nation bow to Allah or be annihilated. Their Koran has not changed.

Most Americans are unaware of the fact that over two hundred years ago, the United States had declared war on Islam, and Thomas Jefferson led the charge!

At the height of the eighteenth century, Muslim pirates were the terror of the Mediterranean and a large area of the North Atlantic. They attacked every ship in sight, and held the crews for exorbitant ransoms.  Those taken hostage were subjected to barbaric treatment, sold as slaves, and wrote heart breaking letters home, begging their government and family members to pay whatever their Mohammedan captors demanded. 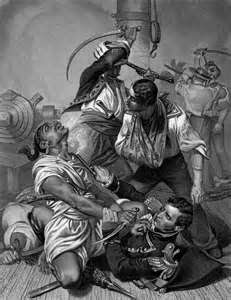 These extortionists of the high seas represented the Islamic nations of Tripoli, Tunis, Morocco, and Algiers – collectively referred to as the Barbary Coast –and presented a dangerous and unprovoked threat to the new American Republic.

Before the Revolutionary War, U.S. merchant ships had been under the protection of Great Britain. When the U.S. declared its independence and entered into war, the ships of the United States were protected by France. However, once the war was won, America had to protect its own fleets. Thus, the birth of the U.S. Navy.

Beginning in 1784, seventeen years before he would become president, Thomas Jefferson became America’s Minister to France.  That same year, the U.S. Congress sought to appease its Muslim adversaries by following in the footsteps of European nations who paid bribes to the Barbary States, rather than engaging them in war.

In July of 1785, Algerian pirates captured American ships,
and the Dey of Algiers demanded an unheard-of ransom of $60,000.
It was a plain and simple case of extortion, and Thomas Jefferson was vehemently opposed to any further payments.  Instead, he proposed to Congress the formation of a coalition of allied nations who together could force the Islamic states into peace.  A disinterested Congress decided to pay the ransom.

In 1786, Thomas Jefferson and John Adams met with Tripoli’s ambassador to Great Britain to ask by what right his nation attacked American ships and enslaved American citizens, and why Muslims held so much hostility towards America, a nation with which they had no previous contacts. 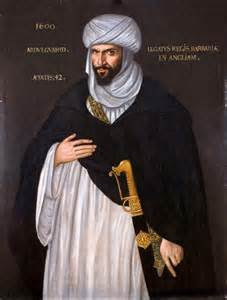 The two future presidents reported that Ambassador Sidi Haji Abdul Rahman Adja had answered that Islam "was founded on the Laws of their Prophet, that it was written in their Quran, that all nations who should not have acknowledged their authority were sinners, that it was their right and duty to make war upon them wherever they could be found, and to make slaves of all they could take as Prisoners, and that every Musselman (Muslim) who should be slain in Battle was sure to go to Paradise."

(Did you get that? This is the same Quran/Koran all faithful Muslims  follow today.)

Despite this stunning admission of premeditated violence on non-Muslim nations, as well as the objections of many notable American leaders, including George Washington, who warned that caving in was both wrong and would only further embolden the enemy, for the following fifteen years, the American government paid the Muslims millions of dollars for the safe passage of American ships or the return of American hostages. The payments in ransom and tribute amounted to over twenty percent of the United States government annual revenues in 1800.

Don't miss my Part 2 blog to see what happened NEXT.

Thanks for stopping by. Would love to hear your comments and hope you'll share on your social media by clicking on the icons below.

Elva Cobb Martin is president of the South Carolina Chapter of American Christian Fiction Writers. She is a former school teacher and a graduate of Anderson University and Erskine College. She has two inspirational novels published with Lighthouse Publishers of the Carolinas. Summer of Deception, a contemporary romantic suspense, and an historical romance, In a Pirate’s Debt. Both have spent time on Amazon’s 100 Best Sellers List for Women’s Religious Fiction. She has indie published a Bible study on Amazon, Power Over Satan, on the  believer's authority in Christ. Decision, Charisma, and Home Life have carried Elva's articles. She and her husband Dwayne are semi-retired ministers. A mother and grandmother, Elva lives in South Carolina. Connect with her on her web site http://www.elvamartin.com,on Twitter www.twitter.com/ElvaCobbMartin; Facebook http://www.facebook.com/elvacobbmartin;  and Pinterest https://www.pinterest.com/elvacobbmartin
Link to her romance novels and non-fiction works on Amazon: http://amzn.to/2pOgVHI