What Type of Violent Offender is Your Villain? - Guest blog

What Type of Violent Offender Is Your Villain? 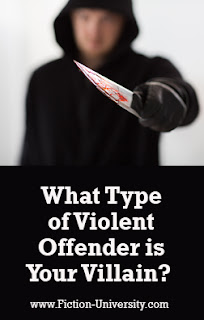 Part of the How They Do It Series (Contributing Author)

Within my work with Violent Threat Risk Assessment, I share characteristics of the four most dominant violent offenders; what motivates them, what personality traits each has, their inherent goals, and how they are most likely to react if / when they are caught.

The four types of offenders are easily identifiable in fiction, film, and real life once you know what you are looking for. And, in turn, villains are much easier to create when you have the recipe of characteristics that create the perfect storm that forms The Violent Offender.

So, without further ado, let’s examine the four types of violent offenders, starting with:

First and most important trait to note: this character is not emotional. A thinker, a plotter, and a schemer, this person will have excellent control over his feelings during a violent episode—there will be no squeamishness, and he will be highly unmoved by his victims cries for help. In fact, if there is any remorse to be felt, it will be only because he wished he would not have had to embark on the ‘extra’ work of hurting or killing someone to get what he wanted; he will know that business would have been much more expedient without the need to now dispose of this pesky dead body. But…what can one do? Sometimes a cumbersome crime scene to clean is the cost of doing business.

The Predominantly Cognitive Offender does not necessarily enjoy violence, and violence in and of itself will not be their goal. Acquiring the sack of rubies will be the end game. Or the brick of cocaine. Perhaps the priceless painting. Violence for the sake of violence is actually a waste of their energy, and beneath their sophistication. Yet, if killing someone is the only way to get the real job done, then…whaddaya do?

The Predominantly Cognitive Offender is most definitely on the sociopathic spectrum; he is a cold fish with little ability and no desire to attach. He will not want to get caught, and in fact will be as slippery as minnows in your swimsuit when it comes to being nailed; unencumbered by any anxiety that might trip a normal person up, this offender will instead be able to lie smoothly, glibly, and there is a high chance he could even easily beat a polygraph. He can and will delay acts of violence if it means a greater likelihood of attaining what he wants and / or lowering the risk of getting caught. He has patience in spades and will execute his end-game expediently and emotionlessly.

Examples of this type of offender include Mario Puzo’s Godfather, and (at his most profound development) Breaking Bad’s Walter White. El Chapo is another stellar example of a Predominantly Cognitive Offender. For these types, it truly is…

Like the aforementioned Cognitive Offender, this type is also highly unemotional, and she too falls upon the sociopathic spectrum. The difference here is motive. Where our other offender uses violence as a means to an end, this offender gets off on the act of violence. Governed by appetites instead of emotion, and certainly highly sadistic, this psychopath is into the thrill of the kill. Think Voldemort employing the Cruciatus Curse while wearing a pleased smile. Or Freddy Krueger building his ‘special’ glove. Ted Bundy, too, was a Behavioral Type Offender; it was the sex/killing that got him off—in fact, he never stole a single valuable from any of his victims, despite being in some of their houses.

Like the first Type, these offenders too are difficult to catch because, while having no emotions of their own to muddy the water, they have become excellent at exuding the charm and glib charisma that often seduces other people into liking them (and believing their lies). These offenders are 100% morally bankrupt, and if they are ever caught, they will never admit their crimes—and will blame anyone and everything for “how they are”.

(Here's more on six steps to creating a great villain)

If our first two types are always in their heads and never their hearts, then this type is the opposite. Mixed Types are HIGHLY emotional. Hotheads who are easily offended and have hair-trigger tempers, these guys are caught easily because they are so incredibly impulsive and wear their emotions (and motives) all over their face. The littlest things can and do set them off; Mixed Types are always at risk of losing their proverbial sh*t because they feel huge emotions about everything.

Simultaneously, they will feel highly justified when they lash out and hurt someone (as opposed to our first two types who, despite being sociopathic and psychopathic respectively, are fully aware, and even agree, that violence is wrong). A Mixed Type will be indignant and resentful if caught and punished—because from their warped point of view, they have been wronged…and so whoever they’ve hurt had it coming. Often odious or at the very least uncomfortable to be around, good examples of a Mixed Type can be found in many Stephen King novels, most notably Jack Torrance in The Shiningand Annie Wilkes in Misery.

(Here's more on 10 traits of a great antagonist)

Out of all the violent offenders, the non-traditional type is by far the most tragic. For while attachment disorder and emotional neglect built our first two offenders, and Borderline Personality is likely at play in our Mixed Type, the Non-Traditional is not someone mentally unhinged or disordered. Instead, the Non-Trad is someone who has either been deeply wounded or horrifically abused…and has coped as best as he/she could until their coping ability ran dry. Now violence is their only option.

Think Carl Lee who kills his daughter’s rapists in John Grisham’s A Time To Kill. Or Carrie White who burns the school down after her last humiliation at the prom in Carrie. These offenders are emotional like the Mixed Types, yet the difference is that while Mixeds are violent often, Non-Trads will usually only ever be violent once in their lifetime. A further distinction is this: A Mixed, if they do feel remorse after committing a crime, will say “I can’t believe I did that” while a Non-Trad will say “I can’t believe I did that to them.” See the shift in empathy? Subtle, but powerful.

Okay! There’s a quick snapshot of each offender. Questions? Comments? Fire away, and make your villains authentically villainy!

Bonnie Randall is a Canadian writer who lives between her two favorite places—the Jasper Rocky Mountains and the City of Champions: Edmonton, Alberta. A clinical counselor who scribbles fiction in notebooks whenever her day job allows, Bonnie is fascinated by the relationships people develop—or covet—with both the known and unknown, the romantic and the arcane.

Her novel Divinity & The Python, a paranormal romantic thriller, was inspired by a cold day in Edmonton when the exhaust rising in the downtown core appeared to be the buildings, releasing their souls.

Thanks for stopping by. I appreciated the great info in the above guest blog. It's a good keeper with all the extra links printed out for a great file on "Villains." Hope you liked it. Would love to hear your  "villain" comments.

Elva Cobb Martin is vice-president of the South Carolina Chapter of American Christian Fiction Writers. She is a former school teacher and a graduate of Anderson University and Erskine College. She has two inspirational novels published with Lighthouse Publishers of the Carolinas. Summer of Deception, a contemporary romantic suspense, and an historical romance, In a Pirate’s Debt. Both have spent time on Amazon’s 100 Best Sellers List for Women’s Religious Fiction. She has indie published a Bible study on Amazon, Power Over Satan, on the  believer's authority in Christ. Decision, Charisma, and Home Life have carried Elva's articles. She and her husband Dwayne are semi-retired ministers. A mother and grandmother, Elva lives in South Carolina. Connect with her on her web site http://www.elvamartin.com,on Twitter www.twitter.com/ElvaCobbMartin; Facebook http://www.facebook.com/elvacobbmartin;  and Pinterest https://www.pinterest.com/elvacobbmartin