He wrecked havoc from the Caribbean to Boston and was so feared that many gave up their goods and money to him without his firing a shot.  Blackbeard was a swashbuckling, fearsome, terrorist who has dominated our tales of the sea from then until now.  He met his fate on November 22, 1718, three hundred years ago this week.  His life and downfall make quite a story.
Blackbeard was born Edward Teach and won his nickname by his long beard and flowing black locks.  He was a skillful navigator and a feared naval tactician.  Newspapers up and down the coast of the Colonies carried the exploits of this most famous of American pirates.  “Who was this upstart who could attack American coastal cities and ships at sea and disappear without a trace?”  Stories and poems were written about him, the invisible and invincible pirate.  Mothers frightened their children with the bare mention of his name.  By the early years of the 18th century Blackbeard had become the best known and most feared of all the rogues of the high seas.
Perhaps Blackbeard’s best known incursion into U.S. history was in May of 1718 when he sailed his fleet of pirate ships into Charleston Harbor.  He blockaded the harbor, captured and plundered nine ships and took several hostages including a member of the South Carolina Legislature.  He held the prisoners for ransom which the city gladly paid to get back their citizens and to see the stern of his ship, Queen Ann’s Revenge, sailing away.
Blackbeard left Charleston Harbor gloating over the fact that not only had he taken the most valuable loot of his career, he had, as one writer put it, “reduced to total submission the proud people of South Carolina without firing a single shot.”
What Blackbeard and his cohorts did not count on was that in the South, revenge rides hard on the heels of humiliation.  History records that the courts of Charleston in November of that same year hanged a total of 49 pirates.  The pride of South Carolina was certainly restored in great measure by these successes against piracy.
Blackbeard, however, was not among those executed in Charleston.
The ruthless pirate met his demise just a few months later when the governor of Virginia dispatched a small fleet to Blackbeard’s stronghold on Ocracoke Island on North Carolina’s Outer Banks.  After a fierce battle, Blackbeard and many of his men were killed or captured.
Lt. Robert Maynard, commander of the Virginia contingent, executed Blackbeard on the deck of his ship.  He chopped off Blackbeard’s head and attached it to his mast.  Legend has it that when they threw Blackbeard’s body over, it swam around the boat seven times before sinking.  The specter of Blackbeard’s head hanging on the mast of Maynard’s ship made quite a sensation when Maynard sailed his ship into the harbor at Norfolk.
Pirates were the scourge of the high seas in the Western Hemisphere from the late 1600s until the Revolutionary War in the late 1770s.  Pirates, or privateers as they came to be called, joined the fight for freedom and were a major factor in the war with Great Britain.
The story of Blackbeard the Pirate is still told in fictional stories.  Several movies have been made about his exploits.  He is memorialized even today on the stage at Myrtle Beach South Carolina where former Anderson, SC resident, Stan Wood, played the villain for several years in Dolly Parton’s Pirates Voyage Show.
The life of Edward Teach, Blackbeard the Pirate, is not one that we celebrate but it is worthy of note that he met his fate three hundred years ago this week.  There has been none like him since.
*** 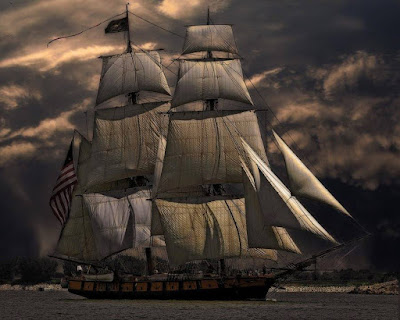 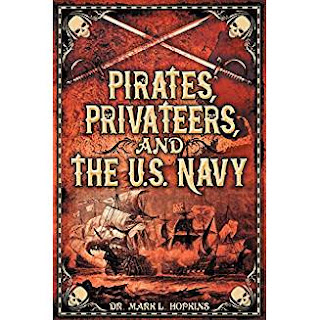 As a footnote to the article, Mark Hopkins has written an excellent creative non-fiction account of how the pirates and privateers joined our war against Britain. Some of Mark's ancestors,  actually helped enlist the pirates to help us win the Revolution against the mighty British Navy war machine. Here's the cover and link on Amazon.  https://amzn.to/2OYZI9X


Thanks for stopping by today! Would love your comments on this article. Please share on your social media by clicking on the small icons below. My next blog will continue my series on "Creating Romantic Tension and Conflict in a Novel."

Elva Cobb Martin is vice-president of the South Carolina Chapter of American Christian Fiction Writers. She is a former school teacher and a graduate of Anderson University and Erskine College. She has two inspirational novels published with Lighthouse Publishers of the Carolinas. Summer of Deception, a contemporary romantic suspense, and an historical romance, In a Pirate’s Debt. Both have spent time on Amazon’s 100 Best Sellers List for Women’s Religious Fiction. She has indie published a Bible study on Amazon, Power Over Satan, on the  believer's authority in Christ. Decision, Charisma, and Home Life have carried Elva's articles. She and her husband Dwayne are semi-retired ministers. A mother and grandmother, Elva lives in South Carolina. Connect with her on her web site http://www.elvamartin.com,on Twitter www.twitter.com/ElvaCobbMartin; Facebook http://www.facebook.com/elvacobbmartin;  and Pinterest https://www.pinterest.com/elvacobbmartin

Posted by Elva Cobb Martin, South Carolina at 7:45 AM No comments: