Character Sketch of a Pirate Hero 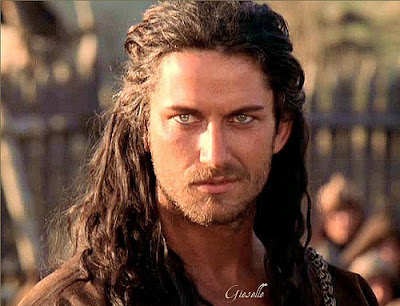 This is actually Scottish actor Gerard Butler in his role as Attila.

Height/hair/coloring: 6' 4" tall,  long dark hair often in plaits; tanned
by long days in the tropical sun on deck of his ship, the Blue Heron.

Eyes: startling green that shoot sparks when angry (like the bloodstone   gem from which he got his nickname)

Weaknesses: inability to forgive master of his indentured parents and what happened to them, and wanting to wreck revenge on Spain for the Inquisition and his parent's capture.

History: Lucas was born in England of a noble mother who married a tutor and was then disowned by her wealthy family. The family came to Charles Town as indentured servants when Lucas was 10. Their papers were bought by Sir Roger Poole, Sr., who mistreated them. The parents were captured by the Spanish while being sent on a ship to the Poole's sugar plantation in Jamaica. Lucas ran away and joined the British navy and gained much knowledge about sailing and leading men. As the story opens, he has his own merchant ship which he also uses for privateering when it suits him. He has recently been led to the Lord by Rev. Ethan Wentworth and his wife Hannah when they begged passage on his ship from England to Charles Town.

Spiritual
As a new Christian Lucas has battles to fight with his old nature and with forgiveness to those who have wronged him or his parents. He is respected by most of his crew. He will find his faith greatly tested as the story progresses.