10 Cliffhangers That Make Readers Turn The Page
by Amanda Patterson 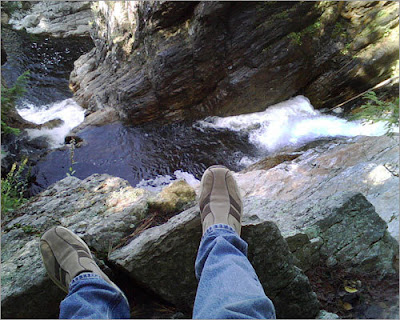 We have put together 10 cliffhangers you can use in your writing to get readers to turn the page.
Have you read a book you feel compelled to carry on reading? You know the kind of book I’m talking about – a gripping read. You read it past your bedtime and during your lunch breaks. You read it because you want to not only know what happens next, but you also wonder what is really going on.
Chances are the author is using a series of cliffhangers to keep you interested.
What Is A Cliffhanger?
According to Oxford Dictionaries it is ‘a dramatic and exciting ending to an episode of a serial, leaving the audience in suspense and anxious not to miss the next episode’.
The term itself originated with a Thomas Hardy serial when one of his protagonists, Henry Knight, was left hanging off a cliff.
Writers use cliffhangers as a literary device at the end of scenes, chapters, and books. These end without the questions raised being resolved. The reader has to carry on reading to find out what happens.
The History Of Cliffhangers
One of the most famous examples of using cliffhangers can be found in One Thousand and One Nights. Scheherazade tells a series of stories to the king for 1,001 nights, ending each on a cliffhanger, to save herself from execution.
They were also an important element of Victorian serial novels, including those by Charles Dickens, a pioneer of the serial publication of narrative fiction.
Television series are notorious for ending seasons on major cliffhangers. The most famous example was the ‘Who Shot JR Ewing?’ ending in Dallas.
Today
Modern writers are using this device more often because readers can easily be tempted away from books. Instead of ending each scene satisfactorily, it has become quite commonly used to prolong suspense.
Cliffhangers are great for pacing. They are the clickbait that get the reader to turn the page. James Patterson has used this technique successfully using short chapters that end without major resolutions.

1. An Unanswered Question
This is the most common cliffhanger. Ask a provocative question or make sure that the one that started the scene is still unanswered.
2. A Loss
The loss can be physical or emotional. It can be a tangible thing or a relationship, but try to make it something that the protagonist thinks he or she can’t do without.
3. Dangle A Carrot
Show the character – protagonist or antagonist – that something he or she wants desperately is there, but out of reach.
4. A Glimmer Of Hope
A pronouncement is made that something something that is needed, new, different, or exciting will happen soon.
5. A Physical Threat
Put the character, or somebody that he or she loves (love interest) in immediate danger. If you have created empathy between your readers and your character, they have to carry on reading.
6. A Sense Of Foreboding
Use foreshadowing and body language. Use signs and symbols. Let your characters know that they will be going off into a dangerous place or a risky situation.
7. A Ticking Clock
End with a sense of urgency. A deadline has to be met.
8. An Accident
This can be a physical accident or a slip of the tongue. Set off an alarm. Reveal a secret. Break a leg.
9. Unexpected News
This includes any important information, or even a person, that shows up unexpectedly. End a scene with the protagonist receiving devastating news
10. An Unmade Decision
A character has a decision that needs to be made.

TOP TIP: If you want to learn how to write a book, sign up for our online course.
by Amanda Patterson

***
I hope you enjoyed this guest post by Amanda Patterson. She's a great writing mentor! Do you know of other "cliffhangers?" Please comment and share this post by clicking on the small icons below. Be blessed and keep writing!

Don't miss my next blog where I am going to share some cliffhangers I devised in my coming novel, Marisol, being released November 12.
Elva Martin

Elva Cobb Martin is Vice President of the SC Chapter of American Christian Fiction Writers. She is a former school teacher and a graduate of Anderson University and Erskine College. She has two inspirational novels published with Lighthouse Publishers of the Carolinas. Summer of Deception, a contemporary romantic suspense, and an historical romance, In a Pirate’s Debt. Both have spent time on Amazon’s 100 Best Sellers List for Women’s Religious Fiction. She has indie published a Bible study on Amazon, Power Over Satan, on the  believer's authority in Christ. Decision, Charisma, and Home Life have carried Elva's articles. She and her husband Dwayne are semi-retired ministers. A mother and grandmother, Elva lives in South Carolina. Connect with her on her web site http://www.elvamartin.com, Twitter www.twitter.com/ElvaCobbMartin; Facebook http://www.facebook.com/elvacobbmartin;  and Pinterest https://www.pinterest.com/elvacobbmartin   Link to her romance novels and non-fiction works on Amazon: http://amzn.to/2pOgVHI
Coming Nov. 12, 2019  Marisol  Book 1 in Charleston Brides
https://amzn.to/33Npc2L

Posted by Elva Cobb Martin, South Carolina at 6:59 AM No comments: