10 Ways to Jump-start Your Writing

10. If the seat in which you park your behind is a good one, you'll park it more often. A while ago, someone told me about her office chair. It has an exercise ball in it. It's actually part of the chair. If you use an exercise ball to sit on but are balance-challenged, this is for you. Then, you can be to be a balanced writer.

9. Have your muse readily available...capture it in a jar. If James Scott Bell can keep "the boys in the basement," I can keep my muse is a jar. In fact, my critique partner Jessica Dotta made it for me. It's amusing to look at (yes, the pun was intended) and will remind me to start creating.

8. Keep chocolate handy. Okay, it's not that new of an idea, but my new take on it works. Allow yourself one M&M for every forty words written. That way you get twenty-five M&Ms for every 1000 words. It's not enough to get fat, unless you're like Karen Kingsbury, who writes 10,000 words a day.

7. Start the week off right with a clean desk. I try to pretend I'm neat. I like to be neat. I write better with a clean desk. But at night, while I'm asleep, the dust bunnies come out to play. They leave an awful mess, stacks of books, notes and scraps of paper, empty M&Ms bags. There's nothing I can do. They're an endangered species. 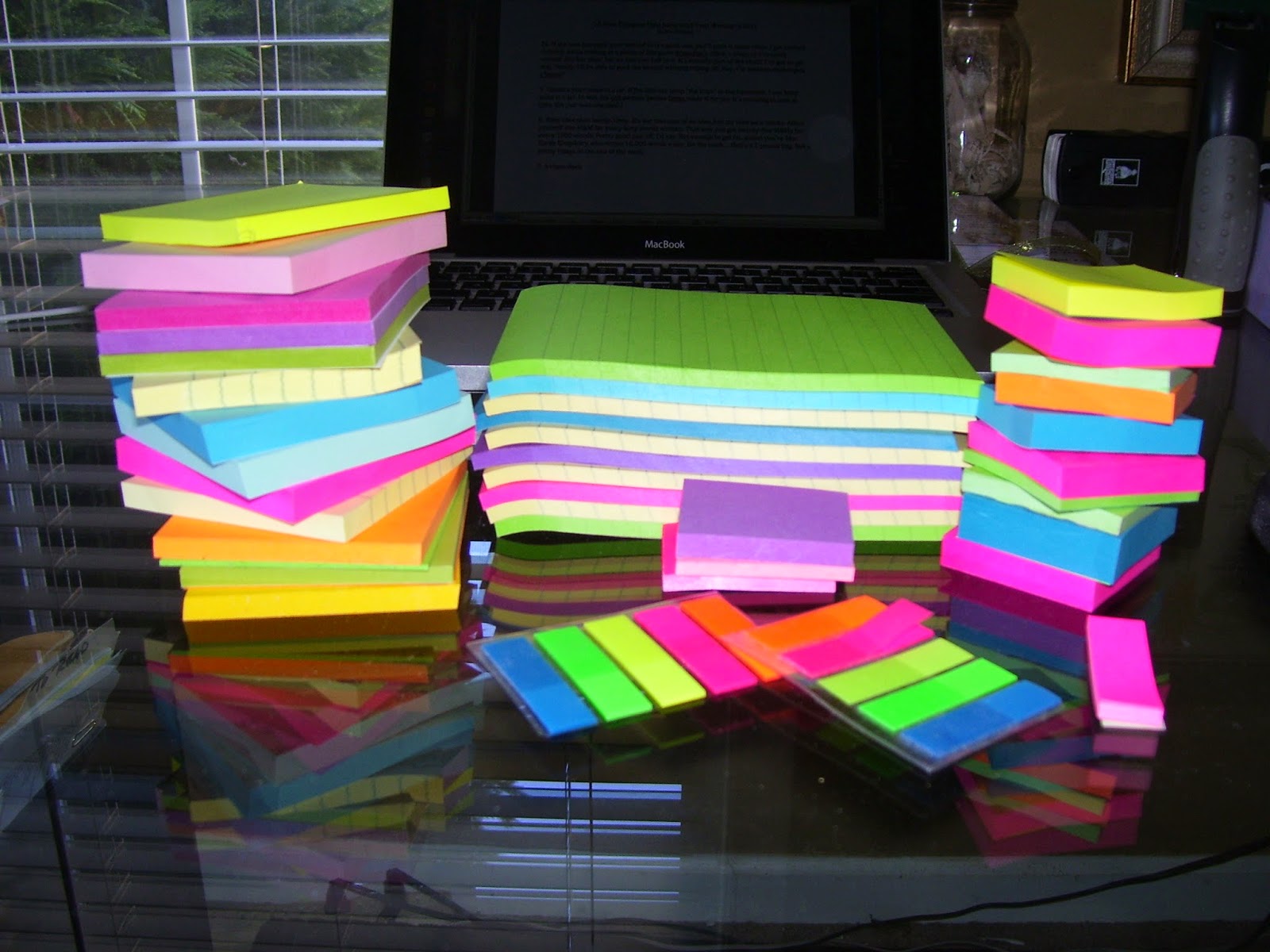 6. Stacks of colorful sticky notes help keep you organized. I attended my local ACFW chapter meeting (go ACFW North Georgia!), where an author told us about her method of editing. It involved different colors, sizes, and shapes of sticky notes. It worked for her, so I figured it would for me, too. The next day, I hurried to the store and $90 later came home with a bag full of every color and size imaginable. The next day I tried it. I discovered this method of editing doesn't work for me, but I'm good for sticky notes for the next five years.

5. Hang inspirational pictures & sayings around your desk for those times when you are not creative. Am I the only one who stares blankly at a screen for eons? I thought my brain had turned to grits. So I hung pictures of my characters, quotations in a pretty frame, anything to fire those synapses in my head. 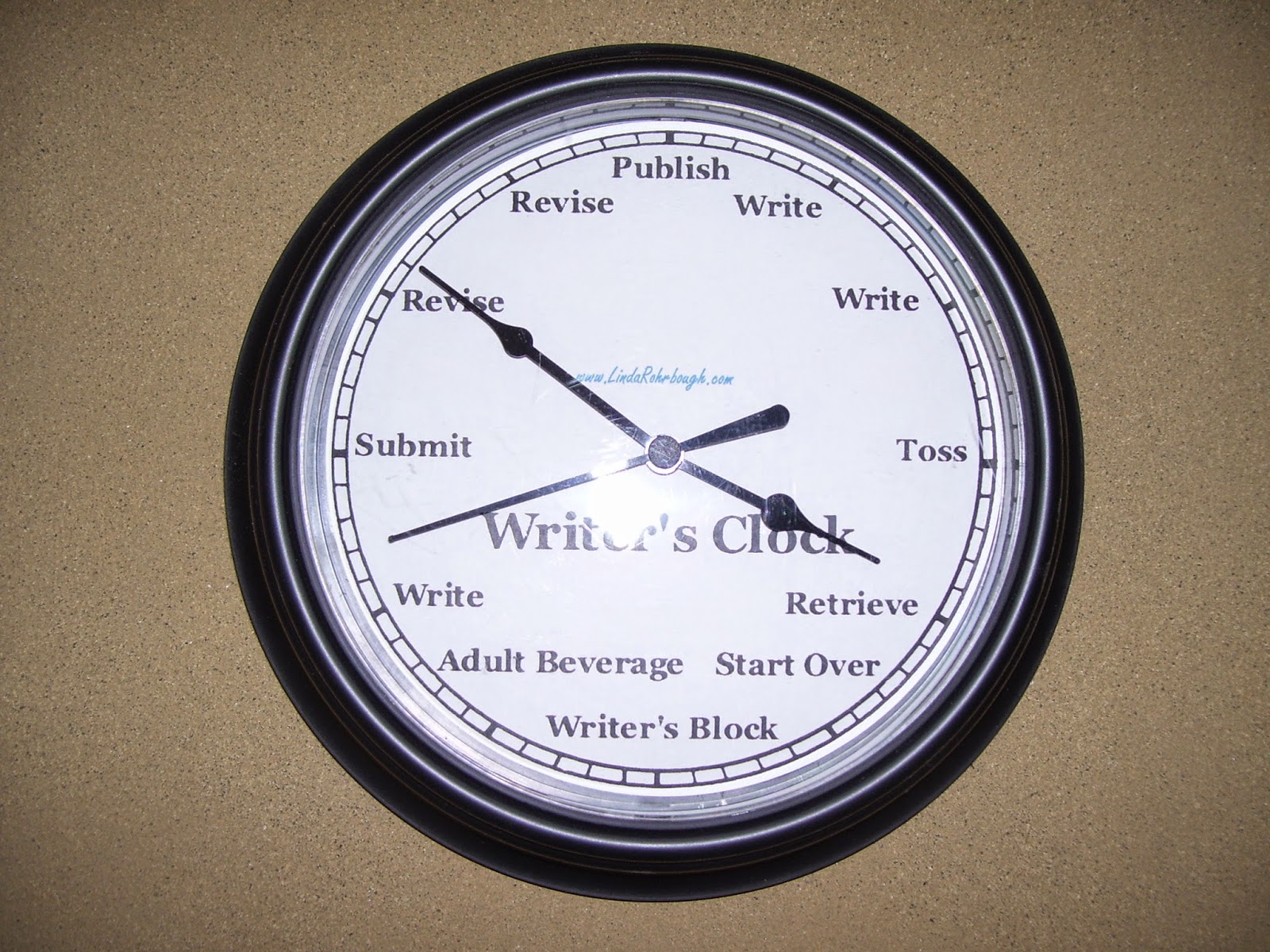 4. Writers' accoutrements. I have a clock, made by one of my writer friends, Linda Rorbaugh. It makes me smile and reminds me that tossing and retrieving are all part of the process of writing. But at nine o'clock there's the submit part that leads to publishing. However, last year, I made it to 12 o'clock. That's PUBLISH!

3. A getaway, no matter how small, is good for writers. It tricks you into thinking you're like Steinbeck or Hemingway. Okay, maybe not, but Starbucks does not have a telephone that rings for you. Nor does it have washing machines or vacuum cleaners that know your name. So, do yourself a favor and break the dull routine you've gotten into.

2. Hang a laminated "Do not disturb ~ writer working" doorknob sign for the office door. Oh, and be sure you shut the door and hang it on the outside. I got a really nice one from My Book Therapy. Of course, it didn't come with a guarantee that the hubs wouldn't open the door and ask if I'm busy. And our mastiffs, Shadrach and Oliver, can't read, so they woof outside until I can't ignore them a minute longer. They have a doggy door a linebacker could fit through, but no, they want personal service. Maybe I should write a manual for authors: How to Train Husbands, Children, and Dogs. Hmm, I could make a fortune...if it worked. Somehow I have my doubts, though. Which leads to... 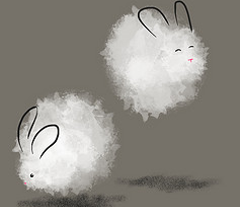 1. Turn a blind eye to dust and clutter. Remember #7? Dust bunnies are an endangered species, so do your part. Give them undisturbed breeding grounds (they breed best amidst clutter). That frees you up to write. It all makes sense if you look at it the right way.


HOPE YOU ENJOYED THIS GUEST BLOG BY ANE MULLIGAN ON NOVEL ROCKET! How to you jump start your writing when it lags? Please do leave a comment and share this good blog on your social media.

Thanksgiving Blessings to you and yours,
Elva Cobb Martin

Posted by Elva Cobb Martin, South Carolina at 7:20 AM No comments:

I blogged on Blackbeard a couple of years ago and thought you might like this shared again as we approach the anniversary of Blackbeard's capture and death on November 22. This was part of my research for my pirate novel, In a Pirate's Debt, for which I am seeking representation.  The below was actually published as an article and a later reprint.

To review, in the first part we shared that piracy had their greatest days in our Atlantic waters in the 1600-1700’s. Many governments at the time supported piracy encouraging it as a cheap way to get expensive goods into their country, especially from their enemies. England and others issued “letters of marque” which gave their own “privateers” as they called these type captains, permission to attack and plunder ships of their enemies.

But piracy became so prevalent at times that honest sea trade almost ground to a halt. Then governments withdrew letters of marque, tracked down the pirates, and hanged them in public.

The history of Charleston, South Carolina, records such a story involving Blackbeard, one the most notorious pirates of all who roamed the Eastern seaboard and the Caribbean.

In May of 1718, Edward Teach, alias Blackbeard, sailed into Charleston with his fleet of pirate ships. He blockaded the harbor, captured and plundered nine ships and took several hostages including Samuel Wragg, a member of the S.C. legislature. After interrogating the hostages about the remaining ships in the harbor—their cargoes and destinations—the victims were thrown down half-naked into the hold.

In exchange for the prisoners, Blackbeard demanded of Governor Johnson something he did not find on the plundered ships, mainly a large supply of meds used to relieve a pirate’s recurring nightmare—syphilis. Blackbeard warned that if his demands were not met, he would execute all the hostages and then raid and sack Charleston.

The legislature complied. It seemed that shame, indignation, and revenge were outranked by fear. Actually, it was wisdom that outranked the lot, with revenge simply being reserved.

Blackbeard sailed away, and he had to be gloating over the fact that not only had he taken the most valuable loot of his career, he had, as one writer put it, “reduced to total submission the proud and militant people of South Carolina without firing a single shot.”

What Blackbeard and his cohorts did not count on was that in the South, revenge rides hard on the heels of humiliation.

Once the pirate squadron sailed out of Charleston Harbor and Samuel Wragg and the other hostages had replaced their clothing, if not their dignity, white-hot Southern dander rose to the surface in the Charleston waters.

It was just the stimulus needed for the difficult task of subduing a hitherto fashionable vice.
History records the results.

The courts of Charleston, in November of that same year, tried, convicted and caused to be hanged in the period of one month a total of 49 pirates.

The pride of South Carolina was certainly restored in great measure by these successes against piracy. Blackbeard, however, was not among those executed in Charleston.

He died on November 22, 1718, at the hand of Lt. Robert Maynard. Maynard and his crew, sent by Lt. Gov. Alexander Spotswood of Virginia, challenged Blackbeard near his Ocracoke, North Carolina, hideout. After being wounded an astounding 25 times, 20 cutlass wounds and five gunshot wounds, Blackbeard succumbed.
Maynard reportedly chopped off Blackbeard’s head and attached it to his mast to sail home. Legend has it that when they threw the body over board, it swam around the boat seven times before sinking.

So goes the story of Blackbeard.

In England the last pirate of this era was strung up in 1840, and in America the last one was hung in 1862.

What is your favorite pirate tale? Why do you think pirates, who for the most part were a dastardly group, still tantalize new generations?

Please join the conversation and share this on Twitter and Facebook by clicking the small buttons below.
Elva Cobb Martin
Posted by Elva Cobb Martin, South Carolina at 4:00 AM No comments: