I Have a Secret to Share about Angela & Becca! Great Help for Authors!

Here's my secret to spill! 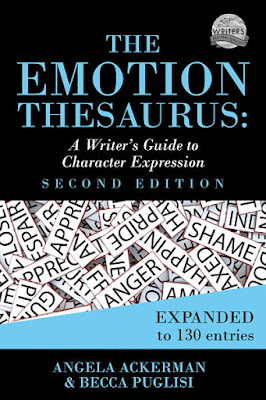 For the last month, I've been part of a Street Team for Angela and Becca at Writers Helping Writers, who are launching their new writing book on February 19th. Because they are known for showing, not telling, they decided it would be fun to keep the thesaurus book's topic a secret until the book cover reveal...WHICH IS TODAY!
It's been hard keeping quiet about this, so I am thrilled I can finally announce that The Emotion Thesaurus Second Edition is coming!
Many of you writers know (and possibly use) the original Emotion Thesaurus.  It released in 2012 and became a must-have resource for many because it contained lists of body language, thoughts, and visceral sensations for 75 emotions, making the difficult task of showing character emotion on the page much easier.
Many people have asked Angela and Becca to add more emotions over the years that they decided to create a second edition. It contains 55 NEW entries, bringing the total to 130 emotions.
This book is almost DOUBLE IN SIZE and there's a lot more new content, so I recommend checking it out. And you can. Right now.
Preorder Alert!
This book is available for preorder, so you can find all the details about this new book's contents by visiting

or swinging by Writers Helping Writers. You can view the full list of emotions included in this new book, too.
One last thing...Angela and Becca have a special gift for writers HERE. If you like free education, stop by and check it out. (It's only available for a limited time!)

THANKS FOR STOPPING BY. Please feel free to share this news on your social media--and would love to hear your comments. Have you discovered Angela and Becca's wonderful thesauruses? They've made me a better writer.

Elva Cobb Martin is vice-president of the South Carolina Chapter of American Christian Fiction Writers. She is a former school teacher and a graduate of Anderson University and Erskine College. She has two inspirational novels published with Lighthouse Publishers of the Carolinas. Summer of Deception, a contemporary romantic suspense, and an historical romance, In a Pirate’s Debt. Both have spent time on Amazon’s 100 Best Sellers List for Women’s Religious Fiction. She has indie published a Bible study on Amazon, Power Over Satan, on the  believer's authority in Christ. Decision, Charisma, and Home Life have carried Elva's articles. She and her husband Dwayne are semi-retired ministers. A mother and grandmother, Elva lives in South Carolina. Connect with her on her web site http://www.elvamartin.com,on Twitter www.twitter.com/ElvaCobbMartin; Facebook http://www.facebook.com/elvacobbmartin;  and Pinterest https://www.pinterest.com/elvacobbmartin
Link to her romance novels and non-fiction works on Amazon:http://amzn.to/2pOgVHI