Just arrived home from a conference for writers of suspense and police procedurals, the Writers’ Police Academy in Green Bay, Wisconsin. The academy is a hands-on opportunity for authors who want to experience for themselves the field of law enforcement with some firefighter, first responder, and sometimes a dive team thrown in for good measure. There won't be many pictures to prove my participation because photography and videos are not allowed in many of the classes  to protect those officers whose identity in undercover work might be compromised. 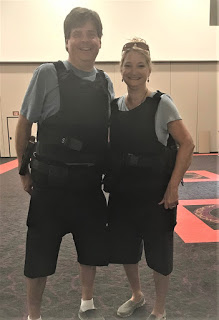 I did take the photo here of my husband and me in some tactical gear. David participated in a timed session of putting on and taking off the gear, which was cumbersome and heavier than expected and consisted of half pants, a bulletproof vest, and a weapon belt.

I loaded and fired a Glock at an indoor range, participated in a simulated shooter incident training, learned the proper defense and arrest tactics of using a baton to gain control of a situation, sketched the face of a wanted criminal, watched a burn house demonstration, a dive team demonstration, and much more. My main observation was that my mind could learn just about anything, but my body reflexes were slow at getting the lesson. Not sure anyone there would want me as their partner on the street. Law enforcement training involves three areas of preparation: mental, physical and emotional, because all reflexes must work in tandem. Life and death decisions are made in nanoseconds.

As a writer, it is important to write as real as possible, even for a world of make believe. Readers learn a lot about the world around them when books accurately reflect life.

A well-written, well-researched story will convey an officer’s biological need to help others, his/her desire to fix other’s problems, the courage to take and maintain control of a situation, his inability to turn off the adrenaline produced from engaging in confrontational circumstances, and his persistent observation of the immediate world around him, unable to shut down that training even in his personal time.

The Academy’s trainers consisted of actual police officers, detectives, a forensic artist, a former undercover agent, a former prosecutor, martial arts expert, interrogation expert, representatives from SIRCHIE, manufacturer of investigative-related solutions, and much more. My husband (he’s a writer too) and I were up at 5:30, at breakfast by 6:30 and on the bus by 7:15. We rode to an international police training facility and participated in classes from testifying in a court of law and the world of undercover to hands-on physical training and microscopic murder weapons. Between 4:00 and 4:30 we boarded the buses back to the hotel where we attended another class between 4:30 and 6:00. Each evening between 8:00 and 10:00 the entire group would gather for one more session.

We met many accomplished authors, learned more than we will ever be able to retain, and arrived at the end of each long day thoroughly exhausted. To close the conference Saturday evening, Jeffrey Deaver, the keynote speaker, who also attended the academy classes along with the rest of us, encouraged us by sharing the early publishing struggles of now-famous and prolific writers.

I would encourage anyone who is serious about writing material that contains elements of law enforcement to attend the annual Writers’ Police Academy to help authenticate their manuscript. Getting the details right makes for a more believable read.

Getting the correct details of any situation in life is important as well before making a judgement (which can be considered merely an opinion or a sensible conclusion according to Oxford Dictionaries).

I always like to leave you with an encouraging word from the one book that has it all, romance, intrigue, murder, deception, crime, and investigative wisdom….the Bible.

“…then you shall investigate and search out and inquire thoroughly.”
***
HOPE YOU ENJOYED THIS GUEST BLOG by Fran. If so, please do share by clicking on the small icons below. 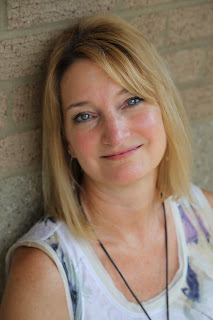 Fran Strickland Anderson is president of the ACFW South Carolina Chapter and is also a member of the Foothills Writer’s Guild and Blue Ridge Writers. She is a contributor to several of the Moments series books published by Grace Publishing and the First Draft Society’s Inklings series. Her current work-in-progress is a redemptive suspense novel entitled Roots That Run Deep. Fran is married to David, is mother of Jake, and resides in upstate South Carolina where she works full time as an assistant city manager. Her blog, Scattering Words and Sowing Seeds (scatteringwordsandsowingseeds.blogspot.com), seeks to entertain, encourage, and inspire both writers and non-writers as they navigate life’s challenges. Most of her stories are still waiting to be told.