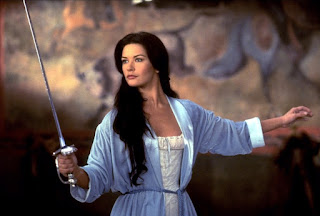 Here's how I have described my heroine swords-woman, Marisol, in a scene in my wip:
Marisol joined swords with the pirate. Blow after blow clanged through the room and sparks flew from the steel blades as the two moved in a macabre dance. The man's dark eyes widened and his growls grew louder as Marisol met every advance with a precise defense.
She proved too fast, agile, and accurate for the larger man. Before all the women were out in the passage she whacked a strike on his chest, slashing into his baldric. He snarled and lunged toward her but she easily sidestepped his thrust.


Thanks for stopping by. Do you have some strong fight verbs to add to our list? Please share by clicking on the small icons below.