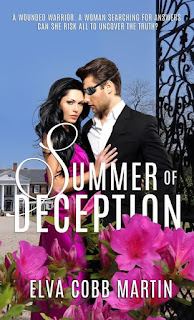 50% off March 24 only for my debut novel
SUMMER OF DECEPTION inspirational romantic suspense. Discount is on publisher site only and for print and eBook   Click here :
http://bit.ly/2mtIEQo
The cover for Summer of Deception, my debut romantic suspense novel, has my hero/heroine on the front cover, lovely southern azaleas and Boone Hall Plantation in Charleston, SC, my setting, that I renamed Barrett Hall.

Summer of Deception
A wounded warrior . . . a woman searching for truth.
Rachel Ann York has no idea that love, adventure, and a shocking revelation await her in Charleston, South Carolina. What can be better than spending a summer taking care of a five-year-old girl on a working tea plantation? Most importantly, she wants to investigate her brother's Atlantic plane crash and death reported by the Charleston Drug Enforcement Administration.
She arrives at Barrett Hall and discovers a handsome new owner and widower back from the Middle East War,the child's father,who knows nothing about her job offer by his deceased uncle. He threatens to send her home.
Even with his eye patch, bitterness and distrust, Luke Barrett captures Rachel's heart until the night she finds evidence he is following in the footsteps of his pirate ancestor, Captain Bloodstone, but in smuggling the white gold, cocaine, which cost her brother's life during his Carolina coastal investigation.
Rachel finds her faith tested by deception, danger and love. Will Luke find his faith again--and a second chance at love?

I'm so glad you stopped by today! What do you think about my new release? Would love to hear your comments. And please do click on the social media icons below to share this special release day blog.

​Author Elva Cobb Martin is president of the South Carolina Chapter of American Christian Fiction Writers (2014-2017). She is a former school teacher and a graduate of Anderson University and Erskine College. Decision, Charisma, and Home Life have carried her articles. Summer of Deception, her debut inspirational romantic suspense novel is to be released March, 24, 2017, by Pelican Books. She has also contracted an historical romance, In a Pirate’s Debt, slated for release by Lighthouse Publishing of the Carolinas in May, 2017. She has published a Bible study, Power Over Satan, available on Amazon.com, and she coordinates an internet Prayer Task Force. Elva is represented by Jim Hart of Hartline Literary. A mother and grandmother, Elva lives with her husband Dwayne and a mini-dachshund writing helper, Lucy, and a parakeet named Tweetie, in Anderson, South Carolina. She would love for  you to connect with her on her web site www.elvamartin.com, her blog http://carolinaromancewit helvamartin.blogspot.com on Twitter http://www.twitter.com/Elvacobbmartin , Facebook http://www.facebook.com/elvacobbmartin, and Pinterest https://www.pinterest.com/elva cobbmartin/

Posted by Elva Cobb Martin, South Carolina at 6:16 AM No comments: