This week my dear friend and fellow member of our ACFW-SC Chapter, Susan Craft, is launching her new historical romantic suspense, Laurel. Lighthouse Publishing of the Carolinas will release the book January 15. 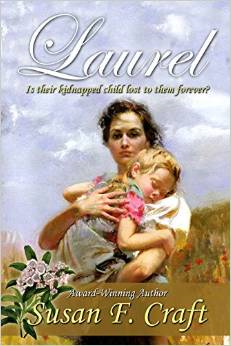 I've read Susan's Chamomile, the first book in this series, and I was so impressed with the story and the historical accuracy relating to South Carolina as well as the exciting plot.

I know you will not be disappointed if you check out this new endeavor of Susan's.

Here is the amazon blurb about Laurel:


Desperate to rescue their kidnapped daughter, Lilyan and Nicholas Xanthakos trek two hundred miles through South Carolina mountains and backcountry wilderness, fighting outlaws, hunger, sleeplessness, and despair. When the trail grows cold, the couple battles guilt and personal shame; Lilyan for letting Laurel out of her sight, and Nicholas for failing to keep his family safe.

They track Laurel to the port of Charleston as post-Revolutionary War passions reach fever pitch. There, Lilyan, a former patriot spy, is charged for the murder of a British officer. She is thrown into the Exchange Building dungeon and chained alongside prostitutes, thieves, and murderers. Separated from her husband, she digs deep inside to re-ignite the courage and faith that helped her survive the war. Determined to free his wife at any cost, Nicholas finds himself forced back into a life of violence he thought he'd left behind.

Following a rumor that Laurel may be aboard a freighter bound for Baltimore, Lilyan and Nicholas secure passage on a departing schooner, but two days into the voyage, a storm blows their ship aground on Diamond Shoals. As the ship founders, both are swept overboard.

Will their love for each other and their faith sustain them as they await word of their missing child? Or is Laurel lost to them forever?