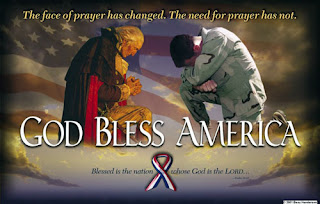 America’s Prayer History - Our  Most Precious National Treasure
As we head into the inauguration of a new U.S. President in January, I am going to share some amazing answered prayers that are part of our spiritual national treasure.

These prayers were by American leaders and by prayer warriors just like you and me, and they impacted our nation’s destiny. Unfortunately, we don’t find these in most of our school textbooks, so we must share them with our children and grandchildren.

At the end of this series, I hope you’ll decide to join the long line of praying Christians before us, take up the torch, and continue the prayer march down the halls of America’s history. YOUR prayers can impact our nation in the coming years and birth the next Great Awakening.

In this series I hope to share sample stories of how simple but fervent prayer led to the discovery of the Americas, helped the colonies become established and preserved and strengthened our ragtag Continental army to break the back of the formidable British war machine, inspired the documents that have guided our country through two centuries, inspired four Great Awakenings, and forged a broken nation back together after the Civil War.

Truly, through all our national conflicts, from the Revolutionary War to the current Middle East Wars, America has been preserved through the incredible power of praying Americans.

Here's a bit about Christopher Columbus:

Columbus Sailed to the Americas in 1492, praying the earth was round, not flat!
Educators teach that Christopher Columbus’s main purpose for sailing west to the Americas was secular. But his personal diary reflects a different  motivation: “It was the Lord who put into my mind (I could feel His hand upon me) that it would be possible to sail from here (Europe) to the Indies...The fact that the gospel must still be preached to so many lands in such a short time, this is what convinces me.”


A priest friend shared a verse of scripture with Columbus  that convinced him the earth must be round. “To whom then will you liken God...It is He that sitteth upon the circle of the earth...” (Isaiah 41:18,22).

Hope you are having a blessed Christmas Season!