Planning an Heroic, Determined, Compassionate Heroine --start with a picture or two. 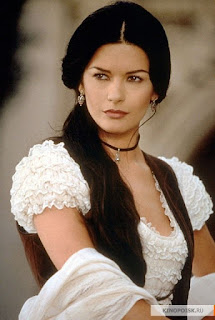 Here are a couple of the photos I've chosen for my heroine in Spanish Captive, showing her two sides as a lovely Spanish lady and a trained sword-fighting foe when necessary. (And, yes, it's going to be necessary). I love having an idea of how my heroine might look as I plan and write the story.
(Do  you recognize Catherine Zeta Jones?) 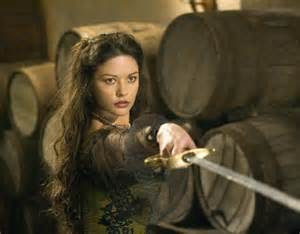 Don't forget my premise for this novel:

Love, forgiveness, and determination can overcome the most horrifying experiences and poor choices when God is invited into the equation.

Here are some characterization details I'm working out for Marisol that will help develop and bring my premise into realization. Of course, some of this may very well change as I write the story. I keep my plotting outline fluid!

Internal Goal/Motivation – to overcome her terrible past and find love, security, respect. She falls in love with widower privateer Captain Ethan Becket, but sees little hope for that relationship due to her terrible past with the murder of a Spanish noble who attacked her.

Spirit of Rejection  - desperately wants to be part of a loving family circle but doubts she's worthy.

Greatest fear: That ALL her past will be revealed and she’ll suffer great consequences, even to being garroted (in Spain) for murder. And Ethan Becket will never understand if he learns of the murder.

The incident that wounded her earlier in life that got her to believing a lie.
Her stepfather tried to marry her off to a rich, wicked don she refused to marry. One day the nobleman attacked her but she managed to stab him, accidentally killing him. She had to flee her home and live by her wits and charms. She escaped from Spain by becoming an indentured slave on a ship bound for the colonies.

Essence: An insecure, frightened, low self-esteem, young woman, who longs to escape her past and find love, family, and security.

Will become: a strong, godly young woman willing and able to fight and sacrifice for  others.

Spiritual Arc
Marisol starts out as a nominal believer, not sure what blessings faith affords. Even though she repented her past sins, she still feels like soiled goods and knows she’ll go to prison or to  execution if the murdered nobleman's family finds her. She is sure no one will believe her version of the attack vs. the version of the man’s family, who are wealthy and of the Spanish nobility.
She Will Become: Marisol will discover through scripture and experiences that God wants to wipe away all that stains her mind, will and emotions and help her become a true woman of God worthy of respect and love. The battle she will face when the murder catches up with her will serve to strengthen her, not to destroy her, and will build a strong faith in God’s justice and belief in his love for her.

Romantic Arc
Marisol falls in love with widower Captain Ethan Becket, but many hurdles stand between these two ever finding love and a HEA.

Do you like this heroine so far?  Please do leave a comment and share the blog on your social media by clicking the square links below.