Part 2 Plotting a Novel: What to Include - The Story of Tea

My contracted romantic suspense novel, Summer of Deception (2017 release date) is set on a tea plantation. During my plotting and research I accumulated quite a bit of information about tea, most of which I didn't use in the book. I thought you might be interested in some of these facts since most of us are tea drinkers of various kinds of tea today. It wasn't always that way.

England only got into tea imports from China in the 1500's. And, of course, the love of tea later spread to America during colonization.

Tea was discovered in China in 2700 BC. Supposedly, some tea leaves fell into a man's boiling water over a fire. China became the largest producer of tea. The Chinese have a saying: "Better to be deprived of food three days than for tea one day." 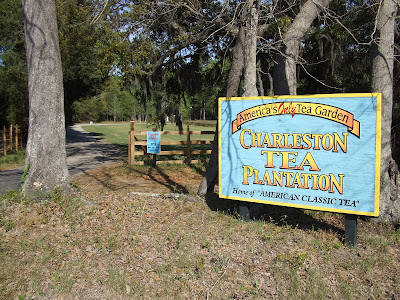 America has one tea plantation and it's in Charleston, South Carolina.

All tea originates from the same Camelis Sinensis evergreen bush that is a relative of the camellia family. I've visited the Charleston Tea Plantation and the leaves do indeed remind you of the shiny, dark green leaves of the camellia. Here is a photo I took of the flower stage. But it's the leaves from which we get our tea and it's quite a process from leaf to tea. 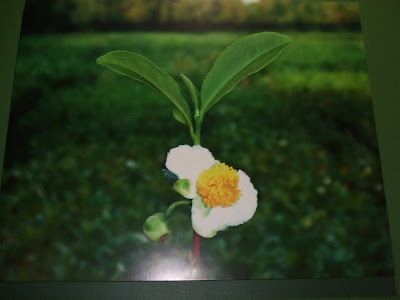 I do briefly describe that process in my novel during a romantic tour of the tea curing barn with my war-wounded hero and tea plantation owner, Luke Barrett, and his mysterious summer employee, heroine Rachel York.

Yep, I definitely plotted a romantic moment out of curing tea and also increased the tension between the h/h! Here's the excerpt:

Rachel almost jumped when Luke turned his attention toward her from the dirt road on which the jeep had been bouncing along.
“I want to show you our tea curing barn, or factory, as we sometimes call it. Interested?”

“Oh yes, I didn’t think any tea grew stateside. I thought it all came from China or India.”
“We are the only place it is grown in the United States.” Luke pulled up to a large structure and parked. Kristina popped out of the back seat and ran to play with one of the worker's children.
As they entered the cool barn interior, Luke adjusted his eyepatch. “This was Uncle Charles' dream as a young man. And now Barrett tea has a name among discerning tea consumers and restaurants.”
Rachel tried to remember everything Luke told her as he walked her through the tea-making process on sawdust paths. She had never dreamed she would see tea leaves cured before her eyes.
“We harvest the tea leaves by hand from an evergreen bush that is a relative of the camellia family. Then it’s brought in here and placed on these moving mesh belts we call withering beds. It sits here for eighteen hours.”
Luke's strong mascline voice somehow affected Rachel's peace as she watched bushels of loose leaves moving on the belts.
Just as she turned to move forward, Rachel stumbled and almost fell in the corridor.
Luke caught her. In that one moment he held her against his chest, Rachel sensed fireworks going off in her head. She felt the steady beat of his heart against her cheek and smelled his manly scent. She quickly regained her footing and pulled away, trying to stop the flush climbing up her neck.
“You okay?” He actually sounded concerned. But a smile played at the corners of his mouth.


“Yes, thanks, I don’t know what happened. Just a stumble bum I guess.”
Luke led her to the next step in the process. She dared not look at him but directed her full attention to the tour and the soft walkway.
Fifteen minutes later they stood back at the jeep. Luke dropped a bombshell. “Tell me, Rachel, was a summer babysitting job the only reason you came to Charleston?” His face held no hint of a smile. He was back in his Marine special ops role.


Rachel’s breath stopped and the blood drained from her face. She bent and shook sawdust from her sandals to cover her reaction. So this little plantation tour was just an excuse to pump her. She straightened and cleared her throat.  “I don’t know why you are asking this again, Mr. Barrett. I think I told you why I decided to take this position. I didn’t relish the idea of the drugstore job back in Ohio and I’d never been to Charleston.”

Do you like different kinds of tea?  I drink hot black tea in the mornings and hot green tea at lunch. I avoid all tea in the evenings because it does have some caffeine that can interrupt sleep, although not as much as coffee has.