Cover Reveal for Marisol - Book 1 in my new series

Escaping to the New World is her only option...Rescuing her will wrap the chains of the Spanish Inquisition around his neck. 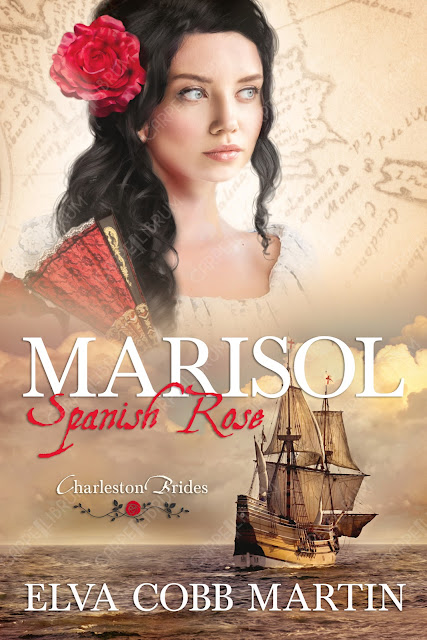 Here's my Cover Reveal! Do pray for God's blessing as we begin the buzz for our new Christian  novel Marisol with its professionally designed cover. Marisol is scheduled to be released Nov. 8. It will go on Amazon for pre-orders in August.

Here is the premise/theme of this novel:
Love, forgiveness, and determination can overcome the most horrifying experiences and poor choices when God is invited into the equation

The scripture that will be printed in the front pages is
Psalm 107:23-30 Amplified Bible
23 Some go down to the sea and travel over it in ships to do business in great waters.
24 These see the works of the Lord and His wonders in the deep.
25 For He commands and raises up the stormy wind, which lifts up the waves of the sea.
26 [Those aboard]mount up to the heavens they go down again to the deeps:  their courage melts away
because of their plight.
27 They reel to and fro and stagger like a drunken man and are at their wits end [all their wisdom has come to                nothing.]
28 Then they cry to the Lord in their trouble and He brings them out of their distresses.
29 He hushes the storm to a calm and to a gentle whisper, so that the waves of the sea are still.
30 Then the men are glad because of the calm, and He brings them to their desired haven.

Thanks for your prayers! That's what will make this book, not only be an exciting read, but also inspire lives with nuggets of God's truth.

Marisol Valentin flees Spain after murdering the nobleman who molested her. She ends up for sale on the indentured servants’ block at Charles Town harbor—dirty, angry, and with child. Her hopes are shattered, but she must find a refuge for herself and the child she carries. Can this new land offer her the grace, love, and security she craves? Or must she escape again to her only living relative in Cartagena?
Captain Ethan Becket, once a Charles Town minister, now sails the seas as a privateer, grieving his deceased wife. But when he takes captive a ship full of indentured servants, he’s intrigued by the woman whose manners seem much more refined than the average Spanish serving girl. Perfect to become governess for his young son. But when he sets out on a quest to find his captured sister, said to be in Cartagena, little does he expect his new Spanish governess to stow away on his ship with her six-month-old son. Yet her offer of help to free his sister is too tempting to pass up. And her beauty, both inside and out, is too attractive for his heart to protect itself against—until he learns she is a wanted murderess.
As their paths intertwine on a journey filled with danger, intrigue, and romance, only love and the grace of God can overcome the past and ignite a new beginning for Marisol and Ethan.

Marisol is scheduled to be released in November by Wild Heart Books. Would you like to be on my street team to receive an early copy in exchange for an honest review, and be eligible for prizes? Let me know! Contact me on my web site at www.elvamartin.com

Book 2, Georgia Ann, my English Rose, (so called by the Tripoli sultan who kidnaps her) is scheduled to be released in 2020.

Book 3, Isabel, is my American Beauty Rose and spy who helps the Swamp Fox and a Charleston patriot pirate during the Revolution. This will release in 2021, God-willing and if we don't lose the War...

Blessings and Onward on the high seas of romance and adventure!
Elva Martin

Elva Cobb Martin is Vice President of the SC Chapter of American Christian Fiction Writers. She is a former school teacher and a graduate of Anderson University and Erskine College. She has two inspirational novels published with Lighthouse Publishers of the Carolinas. Summer of Deception, a contemporary romantic suspense, and an historical romance, In a Pirate’s Debt. Both have spent time on Amazon’s 100 Best Sellers List for Women’s Religious Fiction. She has indie published a Bible study on Amazon, Power Over Satan, on the  believer's authority in Christ. Decision, Charisma, and Home Life have carried Elva's articles. She and her husband Dwayne are semi-retired ministers. A mother and grandmother, Elva lives in South Carolina. Connect with her on her web site http://www.elvamartin.com,on Twitter www.twitter.com/ElvaCobbMartin; Facebook http://www.facebook.com/elvacobbmartin;  and Pinterest https://www.pinterest.com/elvacobbmartin   Link to her romance novels and non-fiction works on Amazon: http://amzn.to/2pOgVHI
Posted by Elva Cobb Martin, South Carolina at 6:00 AM No comments: