Britain continued to pass more taxes on the colonies: The Currency Act to restrain the use of paper money, the Sugar Act imposing duties on a number of articles, including lumber, and then the Stamp Act which imposed direct taxes on the colonies for the first time. All official documents, newspapers, almanacs, and pamphlets were required to have "stamps"--even a deck of playing cards. 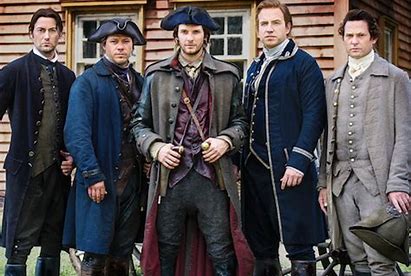 But then a special group of patriots arose! The Sons of Liberty. In this picture from the History Channel/Netflix series on this patriotic group you see Sam Adams center, Paul Revere to his right and, John Hancock and John Adams to his left. George Washington does appear and blesses this group's efforts.

The Sons of Liberty was a secret organization that was created in the Thirteen American Colonies, particularly Boston, to advance the rights of the European colonists and to fight taxation by the British government. It played a major role in most colonies in battling the Stamp Act in 1765. The group officially disbanded after the Stamp Act was repealed. However, the name was applied to other local separatist groups during the years preceding the American Revolution.
The Sons of Liberty used public demonstrations, boycotts, violence and threats of violence to ensure that British tax laws were unenforceable. They included most of the famous names we remember in our early history.

In Boston, where this group got its start, led primarily by Sam Adams, the Sons of Liberty burned the records of the vice admiralty court (which oversaw the collecting of taxes) and looted the home of chief justice Thomas Hutchinson.

Several legislatures called for united action.  In October 1765 delegates to the Stamp Act Congress held in NYC drew up a "Declaration of Rights and Grievances" stating that taxes passed without representation violated their rights as Englishmen. Colonists boycotted British imports.

You can clearly see where all this was heading!

Here's a link to the Sons of Liberty promo from the History Channel series:
https://binged.it/2ZjaEF4  I just watched its entirety on Netflix. Bloody, as any birthing is, it's also very inspiring and further convinced me of how God had to be in on this thing helping the patriots against the great British war machine or we'd never have become a free nation. 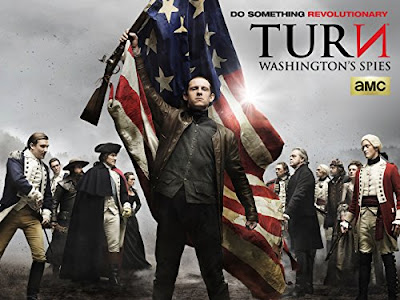 Another great series about the birth of our nation is Turn, also on Netflix. It deals more with Washington's spies and we see a lot of George Washington.

I love to view these type series again near July 4th, just so I don't forget the great battle the patriots fought for our nation to be born. Invite your older children to see these series and leave the right legacy when so much of our history is being ignored or rewritten.

Thank you for stopping by! Please share by clicking on the social media icons below.

Elva Cobb Martin is Vice President of the SC Chapter of American Christian Fiction Writers. She is a former school teacher and a graduate of Anderson University and Erskine College. She has two inspirational novels published with Lighthouse Publishers of the Carolinas. Summer of Deception, a contemporary romantic suspense, and an historical romance, In a Pirate’s Debt. Both have spent time on Amazon’s 100 Best Sellers List for Women’s Religious Fiction. She has indie published a Bible study on Amazon, Power Over Satan, on the  believer's authority in Christ. Decision, Charisma, and Home Life have carried Elva's articles. She and her husband Dwayne are semi-retired ministers. A mother and grandmother, Elva lives in South Carolina. Connect with her on her web site http://www.elvamartin.com,on Twitter www.twitter.com/ElvaCobbMartin; Facebook http://www.facebook.com/elvacobbmartin;  and Pinterest https://www.pinterest.com/elvacobbmartin   Link to her romance novels and non-fiction works on Amazon: http://amzn.to/2pOgVHI