First Round of Edits

Recently I received the first round of edits for my contracted book, Summer of Deception. Have you ever wondered what a professional editor's first round might look like? Here're the beginning pages with editing marks showing overused words and phrases I needed to change or reword. 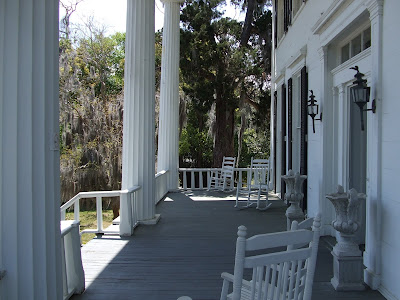 
Barrett Hall arose in the stormy night emblazoned in the taxi headlights. Rachel York’s breath caught in her throat. She shook away lightheadedness and weariness as the taxi crunched the rest of its way up the tree-lined shell drive.
On the wide porch she propped her umbrella beside her suitcase and tried to ignore the shivers of disquiet travelling up her spine. She would find the truth. This new summer job in Charleston was the first step.
The rain pounding against the slate roof stopped as quickly as it had begun. The moon angled out from behind a cloud, and Rachel glanced around the plantation’s wide portico with its six imposing columns and rocking chairs bathed in shadows. The brass horse- head knocker adorning the entrance added to its aura.
She held her wristwatch to the moonlight and grimaced. Ten o’clock. Five hours late. She’d arrived. With no cell phone connection, she had not been able to telephone. How early did the elderly Mr. Barrett retire? Had he given up on her? Thought she’d changed her mind about his job offer? No way. Never had she dreamed such an opportunity would fall into her lap.
Rachel took a deep breath. The smell of sweet gardenias calmed her. Swinging her thick hair behind her shoulders, she lifted the knocker and let it go. The sound broke the quietness like a pistol shot.
A sharp bark from behind startled Rachel’s already antsy nerves. She whirled around. A gray German shepherd the size of a calf stood on the steps staring at her. She gasped as she reached for her umbrella and pointed it at the beast as if it were a sword.
“Gabriel, what are you barking at?” A tall man stepped into view from a path beside the house, shaking rain from his cowboy hat. The moonlight revealed his strong build and tanned good looks. He wore an eye patch and an olive green T-shirt etched with the word, Marines.
He looked up and saw Rachel. “Come Gabriel,” he commanded the dog. The animal obeyed and he snapped a leash on its collar. “Sorry if this big mutt frightened you. He’s not ferocious, but we don’t broadcast that fact. And the umbrella wouldn’t have done an iota of good if he had a mind to attack—which he hasn’t.” The man chuckled, a pleasant sound in the shadows.
Was he a farmhand or some kind of security guard patrolling the grounds? Rachel breathed easier and lowered her umbrella. She was about to speak when the porch flooded with light and the door opened. Rachel turned.
A gray-headed woman in a wilted apron stood in the partial opening. She glared at Rachel with narrowed blue eyes. They widened when they fell on the luggage.
“I’m Rachel York. Mr. Barrett’s expecting me. Sorry I’m so late.”
“Mr. Barrett, eh? He didn't tell me he was ‘specting nobody, ’specially for overnight.” She frowned and pursed her lips. “And I'm the housekeeper. What did you say your name was?”
“Rachel York.” Not expecting her? And definitely not for overnight, but for the whole summer.
The woman opened the door wider and her eyes fell on the man in the shadows. “Oh, there you are.”
Rachel glanced back at the man and dog.
He spoke to the housekeeper. “Mrs. Busby, show our guest to the game room in about five minutes.”
“Yes, sir.”
Obviously not a farmhand. Or a guard. Rachel pulled her luggage into an elegant entrance hall lit by a grand chandelier. A delightful fragrance wafted up from roses on a side table. She propped her Pullman upright and dropped her carry-on beside it. Glancing around, she tilted her chin and smiled. What a lovely, historic place to work this summer.
And who was the striking man who had been walking in the rain?
The housekeeper disappeared, then [SB1] returned and gestured for Rachel to follow. They turned past a curving staircase and stepped down into an enclosed patio dotted with plants amid white wicker furniture. Rachel’s metal-capped heels clicked across polished brick.
What Rachel saw of the house appeared to be exactly the kind she expected an elderly southern plantation owner like Mr. Barrett to have. Dean Woods had described it perfectly as a Gone with the Wind setting. Her future employer had smiled and nodded.
The woman gave a brief knock at a door and opened it. She motioned for Rachel to enter and stepped in beside her.
Rachel inhaled the delightful woodsy scent of cedar chips and turned at the sound of a voice, the same masculine one she’d heard earlier.

Note from [SB1]What did Rachel do or think as she stood there in the entryway waiting? Did her pulse race (due to anxiety?) or did she give a sigh of relief she had at least made it inside?

Next week I'll share the "rewrite" I did of these pages. The editor gave me one month to complete all edits of my 209 pages. At first it took me a day to do three pages. But I soon got the hang of it and was able to do 15-20 pages a day, a better goal for having it finished on time.

What have you learned from this editing sample?  Please leave a comment or suggested changes you'd make to these pages.