Do you believe in angels?
I don't mean the feminine, white satin skirted, golden-haired doll angels we use in our decorating.

Do you believe in the biblical supernatural mighty beings the Bible calls angels? Although we are not to worship angels, do you think we might benefit from understanding more about them in the critical times in which we live?

I started thinking about this subject after reading about a man, Ralph Harlow, and his wife in the Guideposts Christmas issue who reportedly saw and heard a group of angelic beings fly over their heads while the two of them walked on a woodland path. One might easily dismiss this report, except the man gave some impressive credentials: He was a sought after witness in court cases, he had an A.B. from Harvard, an M.A. from Columbia, a Ph.D from Harvard Theological Seminary.

I was reminded of my own personal experience of seeing an angel after going through a deliverance ministry with a young man oppressed by demons. That is a story for another time, but the angel I saw who came to protect me looked like the TV ad's Mr. Clean. No satin, frills or femininity at all.

Some have typed good angels by their activities in the Bible: messenger angels, ministering angels and warrior angels.

Gabriel appeared to Daniel, Zacharias and Mary with messages from God. He is possibly the same one who appeared to Joseph.

The most glorious angelic message of the NT was spoken to the two Marys who came early to the tomb: He is not here, for He has risen.

At the rapture all believers will hear the voice of an archangel with the trumpet of God.

Several texts refer to these angels:

Hebrews 1:14 Are they not all ministering spirits sent forth to minister for those who will inherit salvation? NKJV

Psalm 34:7 The angel of the Lord encamps all around those who fear Him, And delivers them. NKJV 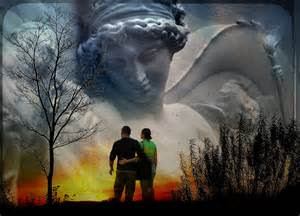 Jacob saw a ladder of these angels coming to and going from earth.
One of these beings went before Israel to lead them to the Promised Land.
Daniel and Elijah were strengthened by the touch of an angel
An angel shut the mouths of lions for Daniel's protection.
These type angels knocked chains off Peter and Paul and opened prison doors.
In Hebrews 12:1 we are told we are surrounded by a great cloud of witnesses who cheer us on and I believe this includes angels, Bible heroes and our departed loved ones in heaven.

The Bible tells us a way we can activate these helpful angels.

Psalm 103:20
Bless the Lord, ye his angels, that excel in strength, that do his commandments, hearkening unto the voice of his word.

When you pray and speak the Word of God and God's promises, you can activate angels to go to work. I also believe you can fight against your angelic assistance by speaking doubt, fear and unbelief. Or by getting into anger, strife or disobedience. Check out Ecclesiastes 5:6

Who can ever doubt the tremendous power of God's warrior angels when we read texts like in 2 Kings 19:35?

35 And it came to pass on a certain night that the angel of the Lord went out, and killed in the camp of the Assyrians one hundred and eighty-five thousand; and when people arose early in the morning, there were the corpses — all dead. 36 So Sennacherib king of Assyria departed and went away, NKJV

Warrior angels are also God's sword-wielding avengers like the angel David saw at the threshing floor of Ornan after David wrongfully numbered Israel.


In Daniel 10 Israel's guardian/warrior angel, Michael, came to aid Gabriel in Babylon battling the demon Prince of Persia.We'll talk in Part 2 about demon angels Satan has assigned to all pagan nations.
In Revelation 20:1-3 A single warrior angel lays hold on Satan, chains him and casts him into the bottomless pit.

Evil may seem dominant but God's Word and His Church will prevail.


Isn't it exciting to know we STILL have angelic assistance in the earth today?

I love the message the angels gave to the shepherds on that hillside so long ago. It's a great one to meditate on this Christmas season:  "Glory to God in the highest, and on earth, peace, good will toward men."

Do you have an angel story? Please share it. And don't miss Part 2 of this series as we blog about bad or evil angels and how we can discern their activities and gain victory over anything they might attempt to do against us.