In Part 1 we defined "Thin Places" as where heaven and earth seem closer due to the prayer and worship that has taken place in that area. Click here for Part 1 http://bit.ly/2i7YP13 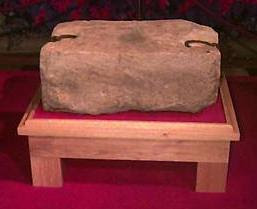 In my research into "thin places" I found myself studying again the story of Jacob in Genesis 28:11-12. If there ever was a thin place, surely where he slept on a stone as his pillow and dreamed of the ladder between heaven and earth with angels descending, this place would be one.

Remember when Jacob awoke, he was afraid and declared, "How dreadful is this place! It is none other than the house of God,and this is the gate to heaven."

Then he set up the stone and poured oil on it and called the name of that place Bethel, meaning house of God.

Now this is where the "rest of the story" related to that stone gets interesting. 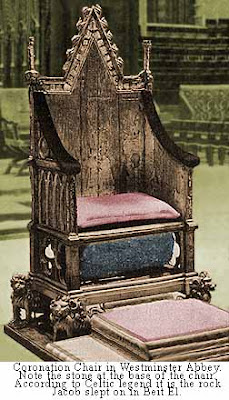 Did you know there is an unfounded tradition related to it? The legend says this stone was finally brought to Jerusalem, later taken to Spain, then to Ireland and finally, to Scotland. On what is supposed to be that very stone, the kings of Scotland were crowned. Later, Edward I of England had it brought to Westminster and placed under the chair on which kings of England have been crowned for centuries.

Along with this stone tradition is the Anglo-Saxon theory that the British and American people are the ten lost tribes of Israel.

For much more information and research about this topic and where the stone is today, click here: http://bit.ly/2izOpLB

Whether the stone legend or ten lost tribes theory are true or not, thin places we started out discussing continue to intrigue me, especially my own thin place of daily prayer and worship. It is from time spent there that I can write with greater spiritual impact. How about you?

Do you have a "thin place" where you feel closer to God and heaven?

Thanks for stopping by and please leave a comment and share this on your social media by clicking on the small icons below.

Elva Cobb Martin is president of the South Carolina Chapter of American Christian Fiction Writers (2014-2017). She is a former school teacher and a graduate of Anderson University and Erskine College. She has two inspirational novels contracted with Lighthouse Publishers of the Carolinas. Summer of Deception, a contemporary romantic suspense, and an historical romance, In a Pirate’s Debt. Both have spent time on Amazon’s 100 Best Sellers List for Women’s Religious Fiction. Decision, Charisma, and Home Life have carried Elva's articles. Jim Hart of Hartline Literary represents her. She and her husband Dwayne are semi-retired ministers. A mother and grandmother, Elva lives in Anderson, South Carolina. Connect with her on her web site http://www.elvamartin.com, her blog http://carolinaromancewithelvamartin.blogspot.com, on Twitter www.twitter.com/ElvaCobbMartin; Facebook http://www.facebook.com/elvacobbmartin;  and Pinterest https://www.pinterest.com/elvacobbmartin


Link to her romance novels and non-fiction works on Amazon: http://amzn.to/2pOgVHI