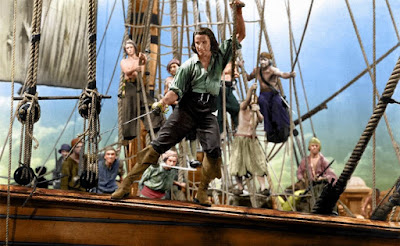 In the 1935 movie, actor Errol Flynn played Captain Blood and it launched Flynn's career. The book was written by Rafael Sabatini.

Arrested during the Monmouth Rebellion and falsely convicted of treason when he treated a wounded follower of Monmouth, Irishman Dr. Peter Blood is banished to the West Indies and sold into slavery. In Port Royal, Jamaica the Governor's daughter Arabella Bishop (Olivia de Havilland) buys him for £10 to spite her uncle, Col. Bishop who owns a major plantation. Life is hard for the men and for Blood as well. By chance he treats the Governor's gout and is soon part of the medical service. He dreams of freedom and when the opportunity strikes, he and his friends rebel taking over a Spanish ship that has attacked the city. Soon, they are the most feared pirates on the seas, men without a country, attacking all ships. When Arabella is prisoner, Blood decides to return her to Port Royal only to find that it is under the control of England's new enemy, France. All of them must decide if they are to fight for their new King. The surprise ending is great.

The story and this character continue to inspire and entertain new generations over the world.

What makes the character Peter Blood so unforgettable?

Who, but one with great courage, can escape slavery in the late 1600's in the Caribbean and lead a crew of slaves with him, then capture a Spanish ship and become its new captain and a feared pirate?

Peter Blood first got arrested in England for treating an injured follower of Monmouth who was rebelling against the king. Many other times his compassion is shown toward his fellow man, including the Governor of Jamaica, whom he treats for painful gout.

3) He is a composite --the very essence of the swashbuckling trickster hero every generation loves.

This type hero reaches back to Samson and other Bible heroes.

Fictional prototypes are Ivanhoe, Zorro, The Scarlet Pimpernel and the contemporary Superman, Bat Man and others.

The swashbuckling trickster hero is able to defy social expectations and rise above social class. He has a keen wit that stands him in good stead in crises. He is a master of disguise and deception when necessary. He is able to baffle his enemies and defeat his opponents. By his wits and fortitude he's able to overcome terrible adversity and establish himself as a noble leader of men. He demonstrates that nobility is innate. It is achieved by chivalrous behavior, not by aristocratic birth.

Peter Blood's personal journey from slave to governor of Jamaica inspires the dreams of men and women on every continent to aspire beyond their present circumstances. 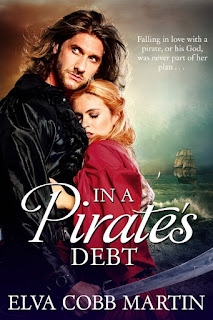 I crafted my In a Pirate's Debt hero after the swashbuckling prototype. Captain Lucas "Bloodstone" Barrett faces many forces of evil with courage before he finds a happy life within the law and with the plucky heroine. Here's the link to this novel http://amzn.to/2i61Z5P

Thanks for stopping by. Who is your fave fictional hero and why? Would love to  read your comments. And please do share this blog by clicking on the small icons below.

Elva Cobb Martin is vice-president of the South Carolina Chapter of American Christian Fiction Writers. She is a former school teacher and a graduate of Anderson University and Erskine College. She has two inspirational novels published with Lighthouse Publishers of the Carolinas. Summer of Deception, a contemporary romantic suspense, and an historical romance, In a Pirate’s Debt. Both have spent time on Amazon’s 100 Best Sellers List for Women’s Religious Fiction. Decision, Charisma, and Home Life have carried Elva's articles. Jim Hart of Hartline Literary represents her. She and her husband Dwayne are semi-retired ministers. A mother and grandmother, Elva lives in South Carolina. Connect with her on her web site http://www.elvamartin.com,on Twitter www.twitter.com/ElvaCobbMartin; Facebook http://www.facebook.com/elvacobbmartin;  and Pinterest https://www.pinterest.com/elvacobbmartin