Here are some more vocabulary words I am listing for my historical series wip set in 1700's Charles Town and the High Seas. 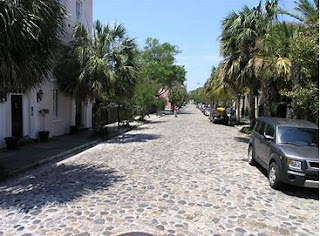 Ballast Bricks or Stones
During the crossing of the seas in the sailing years, captains used the bricks or stones as a weight and balance method in the hold of the ship. After arriving at their destination, the ballast bricks were unloaded and replaced with fine goods for the return. Charles Town's cobbled streets were laid with ballast bricks or stones.

Drogue (Book 1 Marisol Chap 16 excerpt --book to be released in November, 2019!)
"Pondering what to do, Ethan eyes widened as he remembered what was called a drogue device. Dona Maria’s ship could be stopped with such an attachment.The weariness lifted from his mind. A well-crafted drogue applied underwater, out of sight, to the rudder, could cripple the Nuestra Senora de Vargas at sea, away from any Spanish port.
In his former British navy stint it had worked well to stop a slaver and he’d been in on the plan and creation of one. It need be no more than a large sea anchor and a bolt of Number One canvas sewn into a funnel and reinforced to stand the strain with Dona Maria’s ship going at twelve knots. The contraption would be attached to one of the lower pintles of the rudder under water. Attaching the drogue, without being discovered by the ship’s crew, was the tricky part. But once it was put in place, the drogue would tear the rudder clean away when the ship started sailing full speed at sea. The vessel would be rendered helpless and dead in the sea.
He stood, smiling. They could, they would, rescue little Samuel from the woman's clutches."
(Research credit given to Admiral Hornblower in the West Indies.)

Burgoo
A shipboard fare for lower echelon crew members. It was a mix of oat gruel and beef grease cooked all night, usually for breakfast.

Hardtack
Dry, unleavened bread served aboard ship to the lower crew members and sometimes served with salt beef pickled in barrels of brine along with salted peas. The hardtack was a survival biscuit made with three simple ingredients: flour, water and salt. It held up well to rough transport and kept nearly indefinitely.

Hope you've enjoyed my vocabulary list I am generating for my historical romance series. Please do share by clicking on the icons below.

Elva Cobb Martin is vice-president of the South Carolina Chapter of American Christian Fiction Writers. She is a former school teacher and a graduate of Anderson University and Erskine College. She has two inspirational novels published with Lighthouse Publishers of the Carolinas. Summer of Deception, a contemporary romantic suspense, and an historical romance, In a Pirate’s Debt. Both have spent time on Amazon’s 100 Best Sellers List for Women’s Religious Fiction. She has indie published a Bible study on Amazon, Power Over Satan, on the  believer's authority in Christ. Decision, Charisma, and Home Life have carried Elva's articles. She and her husband Dwayne are semi-retired ministers. A mother and grandmother, Elva lives in South Carolina. Connect with her on her web site http://www.elvamartin.com,on Twitter www.twitter.com/ElvaCobbMartin; Facebook http://www.facebook.com/elvacobbmartin;  and Pinterest https://www.pinterest.com/elvacobbmartin
Link to her romance novels and non-fiction works on Amazon: http://amzn.to/2pOgVHI
Posted by Elva Cobb Martin, South Carolina at 5:30 AM No comments: